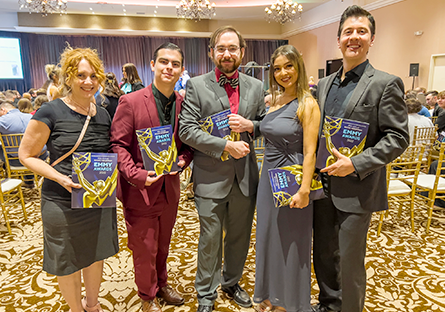 What a night at the 45th Annual Rocky Mountain Emmy® Awards Oct. 1! Two students from the Scottsdale School of Film+Theatre at Scottsdale Community College (SCC) were not only nominated for a National Student Production Award by the National Academy of Television Arts & Sciences, but they won!

Joseph Lara and Jared Cuellar won for their short film "Sector 14" – a science fiction story with outstanding visual effects and stunning cinematography. Their film took home the award in the “College Fiction Short Form Category”. The National Student Production Awards honors outstanding achievement in video production and is an incredible honor that recognizes not only Lara and Cuellar’s artistic talent, but the dedication and skill they displayed to create such an engaging piece of work.

Their film was shot and produced in Advanced Cinematography (FMT217) in Spring 2022 as an in-class project. Advanced Cinematography is one of the final courses students take in the Certificate of Completion (CCL) in Motion Picture Production program and represents the culmination of over 45 credit hours of work. Lara and Cuellar’s masterful execution of the story they set out to tell is a testament to their skill and everything they’ve learned during their time at the Scottsdale School of Film+Theatre.

"I am immensely proud of Joseph and Jared for their outstanding work," said Roberto Gudino, Faculty and Head of Film Production of the Scottsdale School of Film+Theatre at Scottsdale Community College (SCC). "We know the high quality of work our students produce every semester, so it’s extremely gratifying to see them honored by an institution as prestigious as the National Academy of Television Arts &  Sciences."

“I am so grateful to have been provided with this opportunity by my professors and the Scottsdale School of Film+Theatre,” said Lara. “It means a lot to have our work recognized on such a high degree.”

The National Academy of Television Arts & Sciences (NATAS), a professional organization founded in 1955, is dedicated to the advancement of the arts and sciences of television and the promotion of creative leadership for artistic, educational and technical achievements within the television industry (source). Each year, NATAS celebrates television excellence with an Emmy® Awards presentation. The NATAS Student Production Awards honors outstanding achievement in video production among college students.

Learn more about the Scottsdale School of Film+Theatre at SCC.