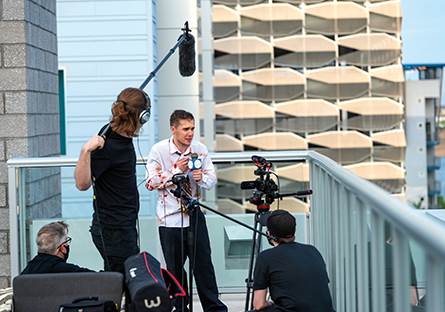 As Arizona continues to attract major film production opportunities to the state, the Arizona Commerce Authority (ACA) has partnered with the Scottsdale School of Film+Theatre at Scottsdale Community College (SCC) to train local talent to fill openings as production assistants. The inaugural Production Assistant Certification program will run Oct. 3 - 7, 2022.

Arizona’s film industry has seen an influx of large-scale production inquiries, including the HBO series Duster, which filmed a pilot episode in Tucson. To build on these successes and prepare for future opportunities, the Production Assistant Certification program is expected to train more than 2,000 production assistants over the next five years, creating a talented workforce that will keep Arizona talent – and dollars – in the state.

“This initiative will be a big boost for Arizona,” says Matthew Earl Jones, Director of Arizona Film and Digital Media, a program of the ACA. “We’re excited that SCC, which is home to one of the leading film schools in the state, has not only agreed to participate in our consortium of five community colleges across Arizona, but that they’ve taken a leading partnership role in developing and sponsoring the initiative, and supporting other colleges as they collaborate to develop this new workforce.”

“Arizona has proved we can attract the biggest names in Hollywood. To take our industry to the next level, we need to demonstrate that we not only offer high-capability studios and technical infrastructure, but also a robust, qualified production assistant workforce that is ready to hit the ground running,” says Scottsdale School of Film+Theatre Department Chair Bill True. “This training program is a key component to helping achieve Arizona’s potential as a top international film destination, and we are proud to be spearheading these efforts."

The new training program adds to Arizona’s statewide efforts, including working with tribal nations, to support the re-emergence of and planned rapid growth of the state’s film industry. In 2021, the Navajo Nation signed a memorandum of understanding with the ACA to promote the Navajo Nation as a film destination. As part of this training program, community colleges will conduct outreach to tribal community members, helping provide new career opportunities to support future projects on tribal lands.

By creating a talented and ready-to-work pool of production assistant candidates, Arizona will be ready to support a lucrative new industry in the state, benefiting an entire range of careers and economic sectors.

About The Arizona Commerce Authority

The Arizona Commerce Authority (ACA) is the state's leading economic development organization with a streamlined mission to grow and strengthen Arizona's economy. The ACA uses a three-pronged approach to advance the overall economy: attract, expand, create - attract out-of-state companies to establish operations in Arizona; work with existing companies to expand their business in Arizona and beyond; and help entrepreneurs create new Arizona businesses in targeted industries. For more information, please visit azcommerce.com and follow the ACA on Twitter @azcommerce.

Scottsdale Community College (SCC) is student centered with a focus on active, engaged and intellectually rigorous learning. The College is known for high quality, accessible educational opportunities and innovative teaching, learning and support services. SCC serves about 10,000 students a year, offering more than 100 degrees and 60 certificates of completion in diverse occupational areas. At only $85 per credit hour, SCC is one of the most affordable colleges in Maricopa County, and the average class size is only 16 students. Through a partnership with the Salt River Pima-Maricopa Indian Community, SCC is honored to be the only two-year public higher education institution located on Native American land. For more information, phone (480) 423‑6700 or visit www.scottsdalecc.edu.