Creatives Challenged to Produce Short Films in Under Two Hours 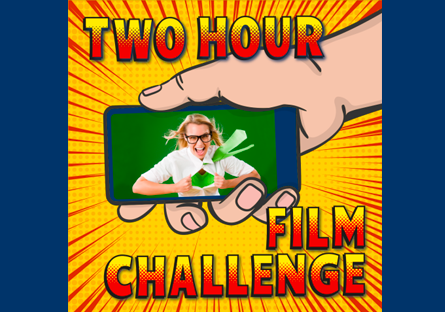 Award season is a great reminder that there is nothing like kicking your feet up with a bucket of popcorn and spending two hours immersed in a movie. But could one make a film in the same time it takes to watch one? That’s the challenge laid down by the Scottsdale School of Film+Theatre at Scottsdale Community College (SCC) during their upcoming Two Hour Film Challenge.

From 4:00 to 6:00 p.m., on April 13, 2022, movie buffs, up-and-coming young artists, and anyone with or without film experience from across the nation will be competing to produce a compelling short film in just two short hours. Working in teams, friends and strangers will come together at the start of the contest to be assigned a title for their film. Once their title has been assigned, each team can determine every other detail of their film including format, topic, and genre. From there all the carefully managed chaos of a movie set ensues, only condensed into one-hundred-and-twenty minutes of pure creative crunch.

Everyone’s unique talents are put to the test in an all-out blitz of writing, acting, filming, and editing. And as art imitates life, it’s all done completely virtually via Zoom. Audience members are encouraged to watch the progress of the event by logging in to the Watch Party starting at 3:30 p.m. and view all submissions starting at 6:30 p.m. to vote for their favorite.

The winning team will be based on total votes by audience members. Each member of the winning team may choose one of the following as their prize, courtesy of The Second City: five (5) drop-in Improv classes or a voucher for any online course at secondcity.com.

“Every year I’m blown away by what these talented artists are able to produce on such short notice,” says Danielle Stallings, a full-time residential faculty member, Head of Foundations for the Scottsdale School of Film+Theatre, and the creator and producer of the Two Hour Film Challenge. “The constraints bolster creativity and silence that inner critic. There’s no time to second guess yourself. The stories that have come out of years past have been funny, heartfelt, and moving. I can’t wait to see what this year’s challenge brings.”