Genocide Awareness Week: Not On Our Watch 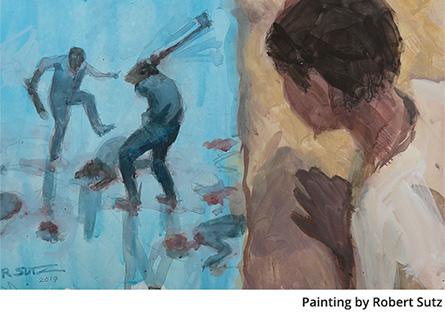 The 9th Annual Genocide Awareness Week, held April 12 - 17, 2021, at Scottsdale Community College, brings together a host of distinguished guests, including survivors, scholars, politicians, artists, activists, humanitarians, and members of law enforcement. The week-long event, featuring lectures, workshops, and storytelling, seeks to address how we, as a global society, confront violent actions and current and ongoing threats of genocide throughout the world, while also looking to the past for guidance and to honor those affected by genocide.

Genocide Awareness Week allows us to explore, as a community, how we confront collective violent acts. Throughout the week, presenters will examine both past and current human rights violations. In addition to historical recounts and personal experiences, several sessions will focus on healing: working with groups in conflict, building trust in affected areas, and a discussion of U.S. policy and involvement.

Holocaust survivor Oskar Knoblauch returns to open the event, sharing his inspiring story of survival and a hopeful message of respect and tolerance. Several scholars from the U.S. Holocaust Memorial Museum are scheduled to present, along with scholars and humanitarians discussing genocide and human rights violations from the Assyrian Genocide to the U.S. - Mexico border.

Opening night features keynote speaker Kerry Kennedy, President of Robert F. Kennedy Human Rights, presenting “RFK Human Rights and the Rohingya Crisis.” Since 1981, Kennedy has worked on diverse human rights issues including child labor, disappearances, indigenous land rights, judicial independence, freedom of expression, ethnic violence, impunity, women’s rights, and the environment. She is the author of the New York Times bestseller “Being Catholic Now” (2008), “Speak Truth to Power” (2000), and “Robert F. Kennedy: Ripples of Hope” (2018). Kennedy completed her undergraduate education at Brown University and earned a law degree from Boston College. For over a decade, Kennedy served as Chair of the Amnesty International USA Leadership Council. She currently serves on the board of directors for numerous human rights organizations, and is on the Advisory Committee for the Association of American Indian Affairs, the Albert Schweitzer Institute, Sankofa, San Patrignano, and the Center for Victims of Torture.

Tuesday’s schedule includes a screening of Kevin Ekvall’s documentary, “I’m Not Leaving,” which tells the story of Carl Wilkens, the only American who refused to leave Rwanda when the 1994 genocide broke out. Tuesday evening, Wilkens will share his story firsthand during his presentation, Restorative Pathways: Building trust in Rwanda.

All presentations will be held virtually. Events are free and open to the public, with the exception of the Law Enforcement and Society Workshops, which are limited to sworn law enforcement and prosecuting attorneys only. Educators attending Saturday’s ADL Educators Workshop are eligible for recertification.

Genocide Awareness Week is sponsored in part by local and national organizations. Scottsdale Community College extends a special thanks to the event’s sponsors, including the Phoenix Holocaust Association, Andrew & Amy Cohn, Steve & Suzanne Hilton, and the Armenian Assembly of America.

For the complete schedule of events, to register, or to join a presentation, visit the Genocide Awareness Week schedule.